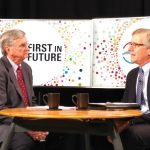 Want to know how rural North Carolina’s doing these days? Well, here’s a statistic to think about: Last year, half the state’s rural counties gained jobs and half lost jobs, while the overwhelming majority of North Carolina’s suburban and rural counties gained jobs. Rural counties aren’t doing as well as urban areas, it seems, but the picture might be more complicated than you think, with some rural areas blossoming in the modern economy and others lagging behind. And if there’s anyone who knows the different chapters of rural North Carolina’s story, it’s Grant Godwin. Godwin currently serves as chair of the board of the Rural Economic Development Center after spending a long career in the private and public sector. A native North Carolinian, Grant grew up on a farm in Sampson County and learned some lessons that have lasted a lifetime. Take a listen as he tells them and maybe you can apply some to your own life. Also, if you’ve ever wondered how to safely approach a turkey, you’ll learn that today, too.

This installment of First in Future is part of a special TV series produced in collaboration with UNC-TV, and recorded in UNC-TV’s  Studios. Taped segments will air on the North Carolina Channel. Visit www.ncchannel.org/schedule/ for specific air dates.

Excerpts:“You are not going to sneak up on a turkey, you have to just take it head on and tackle it .”