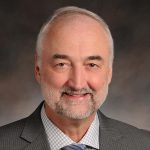 From the beginning, it was a romantic idea. In 1954, a building contractor named Romeo got together with North Carolina’s state treasurer and a bank president to hatch a ridiculous idea – what if the biggest companies in the world decided to show up and move their operations to a big plot of land covered with pine trees in the middle of North Carolina? If you’ve never thought of it, it’s worth noting that the biggest selling point of what became the Research Triangle Park was that there was a bunch of research going on at three points of a triangle – at Duke in Durham, at UNC in Chapel Hill and at NC State in Raleigh. And the idea was that companies would want to be close to the really smart people who were doing that research and graduating from those places. As part of the park package, businesses and the three universities kicked in $500,000 to start a nonprofit called the Research Triangle Institute, where people would “improve the human condition by turning knowledge into practice.” Sixty years later, RTI International is not just a support to the Park, it’s a huge employer too. How did it get so big? What’s it working on? And what can RTI tell us about addressing some of North Carolina’s biggest challenges? I talked to RTI International President and CEO Wayne Holden about RTI’s research on the opioid crisis, how they help in communities, and what it takes to come up with truly innovative ideas. 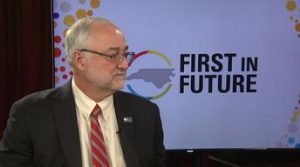 This installment of First in Future is part of a special TV series produced in collaboration with UNC-TV, and recorded in UNC-TV’s Legislative Studio in downtown Raleigh. Taped segments will air on the North Carolina Channel. Visit www.ncchannel.org/schedule/ for specific air dates. Watch the UNC-TV broadcast version via online streaming here!

Excerpts:  “…it was government, it was the commercial sector, and it was the educational institutions that really came together to come up with a vision, that wasn’t a vision that was bound by election cycles, it wasn’t a vision that was bound by the short-term issues that often get caught up market forces, it was a vision about driving into the future across multiple decades.”

Book recommendations:  The Inevitable by Keven Kelly and The Wealth of Humans by Ryan Avent

What key issues should we be working on within the next couple of years to make North Carolina a better place?   Putting together a long-term economic development plan that is oriented toward technology and technological changes into the future, and addresses the issues of inequality and disparity.

Next great North Carolinian to watch?  The generation of people now in their 20s and 30s.