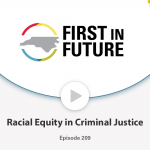 *This episode of First in Future was recorded on Thursday, July 28th, and reflects information that was up-to-date at that time.*

How did George Floyd’s death affect you?
Justice Earls: I was deeply saddened. It came on the heels of other Black people being killed (Breonna Taylor, Ahmaud Arbery), so it felt overwhelming in terms of the pain I felt.

General Stein: I felt anger, fury, depression, sadness. It’s especially problematic when death is caused by someone we give authority to. It was very distressing.

We’re seeing sustained protests in response. What is different this time?
General Stein: Many Black people know they haven’t been treated equitably by law enforcement or the criminal justice system. It hit all Americans to have to watch the callousness of the officer. I think it’s changed the way Americans are considering the issue – a newfound recognition of the truth. It gives me a little hope that this time is going to be different and we can advance policies to make things better.

Justice Earls: Difference is breadth – have had demonstrations across the country. Diversity of people demonstrating is notable. We’re seeing protests with an agenda behind them. Will we be able to translate these demands for change, which reach to society as a whole?

You’ve got a coalition of people on task force charged with coming up with a report in a short period of time, looking at a wide scope of things to address. How do you bring together those people to take on that range of issues?
General Stein: I have optimism. We live in divided, partisan times. Yet one issue in recent years where Reps and Dems have worked together is criminal justice. There’s a willingness to work across the aisle. All perspectives you listed are necessary on the task force. The group has already come to consensus on reforms and taken preliminary steps. We’re meeting every 2 weeks until the end of this year to come up with an effective, comprehensive list that will make a difference.

What can you say about sentencing as part of this task force that will make a meaningful difference?
Justice Earls: There have been efforts to address racial disparities in sentencing. In NC, Race Matters for Juvenile Justice in Mecklenburg County (initiated by judges). Training on implicit racial bias and tools developed to counteract that among judges is just one policy option that exists. Another part is being aware of the data. Putting in place systems that measure and monitor racial outcomes in the system will get us closer to equal justice. Their awareness would cause them to be more careful in their sentencing decisions.

To what extent can training make a difference for police and is the task force going to speak to it?
General Stein: Training is very important. It starts at recruiting as well. You want the right personality types: better served by guardian than warrior types. It has to do with pay (want to increase pay to make it more attractive) and duties – if we overwhelm them with duties, asking them to be peace officers, drug counselors, social workers, mental health crisis intervenors – it’s too much to put on one person’s shoulders. In both basic LE training and mandated in-service, we’re constantly revising curriculum to address what’s going on at the moment (implicit bias, de-escalating, etc.). We recognize you’re never done, so it’s part of the agenda on the task force – looking at courses, training, what we need to do better.

How do you keep up training when the mandate is so large?
General Stein: We need to reimagine how we keep the public safe. When someone calls 911 for a mental health issue, maybe it’s better to have a mental health counselor respond, and maybe the police go too. It’s challenging because of pay, breadth of responsibilities and because we ask so much of them and the criminal justice system to be a repository of our social problems. The community is upset with the way the police department is engaging with them, really through the fault of government for failing to create a system that effectively deals with these widespread problems. If we can reimagine public safety, get good people in law enforcement, adequately train them, then the community starts to have more faith and it becomes a more attractive profession.

Is there anything that can happen in the near term that can make our prisons safer in terms of COVID-19?
Justice Earls: Secretary Hooks is a member of the task force, and this question has come before the Supreme Court and could come back before it, so I can’t comment at this stage.

On police training:
Justice Earls: We’re missing accountability. Judge Wynn of 4th Circuit wrote an article about how our legal doctrine, by expanding the concept of qualified immunity, has fallen down in the task of holding police officers accountable when they do violate rights by using excessive force. There’s accountability within the justice system, but there are also mechanisms like civilian review boards.

What’s the task force looking at when it comes to bonds?
Justice Earls: One of the working groups has pre-trial lease and bonds on the agenda. Our state statute is fairly explicit that money bonds should not be the first method of ensuring someone comes back for trial. There are proposals that have been studied before this task force – efforts to look at how to better enforce NC’s statute equally. The experience is different across the state.

General Stein: Agree 100% with that – my office has been working on this issue for a year and a half. I’ve organized a series of conferences to get actors in the criminal justice system to talk about it. If a person is detained, it should be because they pose a societal risk, not because they’re poor. That is absolutely one of the issues the task force will wrestle with.

What do you think when you hear the words “defund the police”?
General Stein: The real challenge is to reimagine public safety. We put way too much on officers. We should have drug counselors respond to drug crises, mental health counselors for mental health crises, social workers for family crises. We should invest more to pay officers a decent wage to make it an attractive job for public-spirited people.

What promising ideas have you heard about courts/charging decisions and post-conviction?
Justice Earls: We’ve seen district attorneys looking at how their offices operate, reviewing whether they’re making decisions fairly. Task force can recommend incentives to get district attorneys to address that. Promising models from other states. Legislature has already acted on post-conviction/collateral consequences of a conviction. There are so many barriers to renting an apartment, getting a job, furthering education, that accompany a criminal conviction. Legislature has taken action to make it easier to get expunctions and pull back on some of those barriers. Work amongst attorneys to represent people to get convictions cleared. When you remove that barrier, it opens up opportunities and it has a ripple effect on community. Seeing whether there might be consensus across party lines to grant greater relief in those circumstances is a promising avenue.

What can be done with sentencing?
Justice Earls: The state revamped its sentencing statutes many years ago. Is more discretion better (individualized), or is less discretion better (uniform)? This task force is tasked with looking at racial equity – you can look at data and see where judges are being more fair, less fair. At the end of the day, it’s up to the voters. We elect judges. Observing how our politics have gone in the past, demand from voters has been for judges who are strict, harsh on crime. “What I think one of the impacts of understanding that George Floyd’s death was not an isolated event, and that racial disparities exist throughout our criminal justice system, hopefully is also an understanding that the over-criminalization in our society and that locking people up for long periods of time is actually not good for us on a number of levels, might lead to voters asking judges to exercise their discretion in a different way.”

General Stein: If we measure this and know which judges are doing what in terms of sentencing, that’s good for a number of reasons. Putting data in front of judges so they can see the sentencing disparity is a healthy thing – they will consciously work hard to address that. To the extent that they don’t, the voters have the final word.

There are people on the task force that may not agree; range of opinion. What’s your strategy to find consensus?
General Stein: Have a shared set of data so we know the facts and find the appropriate response. There will be debate, discussion and disagreement. We’re missing out on in-person rapport doing it all virtually, but in our second meeting, the fact that we were able to make 3 important reform recommendations is very encouraging.

How do people make their voices heard?
Justice Earls: There will be public comment sessions and there is a web portal for written comments. Mailing material is an option too. We will also have regional listening sessions.

First in Future: Chair for the NC School of Science and Math Tom Looney From Crisis to Opportunity in Child Care