YOU helped us launch our ReCONNECT NC initiative with our first ever forum outside Raleigh, ReCONNECT to Community!

The civic engagement-focused forum drew in over 400 attendees as well as thought leaders from across the state and nation, discussing the many different ways we can keep our communities better engaged and more connected. 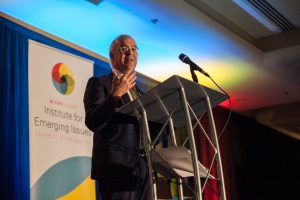 David Brooks speaks to the crowd. The New York Times columnist was the forum’s keynote speaker.

Held at the beautiful Renaissance Asheville Hotel in Asheville, the forum, more intimate and interactive than forums of the past, featured speakers like New York Times columnist David Brooks, community activist Tru Pettigrew and five North Carolina communities speaking about the real-world, innovative ways that they’re tackling civic engagement issues in their part of the state.

This was the first time in IEI’s more than 30-plus years that we held a forum outside Raleigh in an effort to carry our work and mission to the state’s many diverse regions.

“It was exciting to me to see so many people in the same room at the same time (and online and through the broadcast) putting their brains together to help us figure out this reconnection question. We hope for some people this launches a set of community meetings. For others, it will be more like a buffet menu, where they take an idea or two home with them. We hope everyone will do something themselves–even if it is doing the #4cookiechallenge. That’s something we all can do, and, as David Brooks said, real progress in community starts with one-on-one relationships,” said IEI Director Leslie Boney

Keynote speaker David Brooks kicked off the day-long event in a speech examining just why American communities aren’t as socially connected as they used to be. The New York Times columnist has written bestselling books on many of the topics he covered, such as a rise in tribalism as society has shifted away from the group-oriented culture of the 1950s.

“When you leave people isolated and alone they return to tribe,” Brooks said. 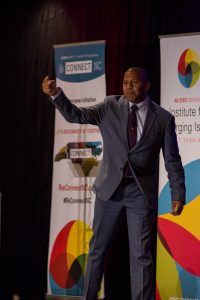 The day’s last speaker, community activist Tru Pettigrew, spoke about one such way to connect community, the grassroots campaign he started in his town with Cary Police Chief Tony Godwin to begin a dialogue between the community’s police force and its people of color after several young men of color were killed by police in high-profile national cases.

“What a powerful opportunity it is to have relationships and connect,” Chief Godwin said during his speech.

Throughout the day, speakers like Katya Abazajian of the Sunlight Foundation, Darin Waters of UNC Asheville, and Parc Smith of American YouthWorks examined how to foster civic engagement from a number of angles, including understanding history, engaging technology and participating in service work.

The day also featured stories from five community initiatives (Asheville City Schools Foundation, Rural Opportunity Institute, One Team. One Goal. One Community, Explore Elkin and the Community Innovation Lab) from across the state chosen by IEI to tell their real-world stories of civic engagement at the forum. 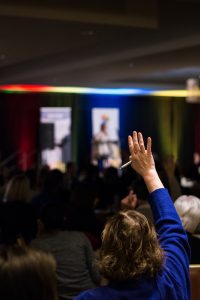 Audience questions were encouraged during segments of the forum.

The community groups then directly engaged with the audience during lunchtime during tabletop discussions.

Our partners at ReachNC also provided interactive polling throughout the day, allowing the audience to answer questions pertaining to the day’s events and speakers in real time.

“It was great to see so many people connecting and engaging with each other and with the speakers. I was particularly excited to hear the community stories, and I know the audience enjoyed engaging directly with community leaders around the state,” said IEI Policy and Program Manager Maggie Woods, who served as the forum’s lead.

Here at IEI, we hope the spirit of connection sparked by the forum doesn’t stop!

We hope you’ll take our six suggestions of things to do in your community to increase civic engagement.

We also hope you’ll continue on this journey of ReCONNECTion with us. ReCONNECT to Community was just the first in a series of six forums we’ll hold across the state examining different ways to ReCONNECT North Carolina civically, socially and economically.

Up next: Our ReCONNECT Rural & Urban forum happening Feb. 11 in Raleigh!