In November of 1992, I was working as a reporter when a strange call came in.

“We’d like to talk to you about working in government.”

I have to say I had never thought about it. And if I had, I would have dismissed it. In fact, I had been building up a little pile of stories on government corruption, calling out politicians behaving badly, and highlighting federal delays in getting funding out after disasters. I was getting good at pointing out what was wrong with government. So I told the caller that.

“Yeah,” she said, “But if you come here you might actually be able to fix some of that stuff.”

I jumped. Who wouldn’t?

Well, a lot of people. If you look at the numbers it’s getting harder and harder to attract young people into government jobs. At a meeting convened earlier this week by the Volcker Alliance, we learned that only about 12 percent of the government workforce is under the age of 30, compared to 24 percent of people working in the private sector. People working in local, state and federal government are all getting older.

Problem 2 is perhaps even bigger. We’ve all seen the nosedive in membership in civic groups and faith organizations—people who volunteer to serve their communities part time. And it’s not just that we are doing the same kinds of work in different ways. If you look at surveys of the community, only 24 percent of people in our state volunteered for anything in the past year. Just 44 percent report even talking to a neighbor in the past 12 months; 6 percent of us say we have worked on a project with a neighbor.

How does a society make progress if we don’t have a core of people who feel some obligation to invest some kind of time in their communities? Are there things we could do to encourage more people to consider doing more that would fall into the category of “public service,” whether as a full-time job or at least as a side hustle?

We’re trying two things at the Institute for Emerging Issues to make it easier for folks to try.

We officially launched a project called Service Year NC last month. Led by Darryl Lester, Service Year NC will be making the case that more North Carolinians should spend a year or more in “service,” through a formalized program such as AmeriCorps, AmeriCorps VISTA, Public Allies, College Advising Corps, Teach for America, or any of a number of other public service jobs that get young people into communities. The jobs give young people great job skills and give communities new assets to address challenges.

Our three-year ReCONNECT NC program (register for our Nov. 27 ReCONNECT to Community Asheville forum!) is built off of a similar premise: If more people bring their time and 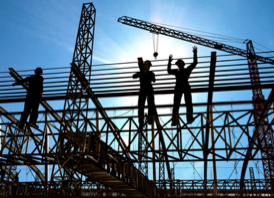 brains to bear on big challenges, our communities will be better off. They don’t have to drop everything or go into a career of “public service”—they can give the time they have available. They can start by helping with just one thing. And if they do, their community will welcome them.

As for the impact of their service on their neighborhoods or towns, I can’t quantify that.

Twenty-six years after I got that call and started working with government, community and educational organizations; government corruption continues, politicians continue to behave badly  and disaster funding still lags. People still struggle to find work and overcome barriers. But I can point to inches of progress.

And I can tell you for sure it is a lot more fun to work on building things up than at tearing them down.

I hope you’ll join us on a community building blitz. What are you doing the next three years?