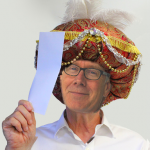 In 16th century England and Ireland, one of the staples of Halloween was predicting the future. They did it through a series of party games. After peeling an apple in one strip, they would toss the peel over their shoulder. The shape the peel landed in was supposed to tell them the first letter of the name of the person they would marry. Later, as if things weren’t already rocking enough, they would eat cakes with various items baked into them – rings, coins, etc. The object you found would tell you what your future held.

IEI’s predictions, forecasts, and projections don’t always come true, but we keep working at it. I feel VERY CONFIDENT about this month’s predictions.

So what are YOUR predictions for our state’s future? What is ONE THING you predict will happen here in North Carolina over the next 12 months? Let us know! Tweet at us: @emergingissues. We’ll keep track of your predictions and next October, we’ll report back on which ones came true and will provide a fresh apple peel to the person with the boldest accurate prediction!

Happy Halloween and thanks for your concern about our state’s future.

P.S.  Note to staff: next time we share new projection data, should we consider embedding the map in a Bundt cake?

P.S.S. Note from staff: Few people were harmed during the Photoshopping of Director’s image.