Walking into the James B Hunt Jr. Library is more like walking into a very colorful spaceship than a library, a very cool, colorful spaceship—at least that’s what I thought as I walked through the building’s glass doors on my way to interview for a job with the Institute for Emerging Issues , which occupies the library’s fourth floor  As I stared up at the flashing LED lights of the IEI Ribbon, which runs through a three-story lobby from the second to fourth floor, I figured I’d feel a little like James T. Kirk if I landed a job in such a high-tech facility, but you know, without all those weird speech patterns he had.

Thankfully, I got the job, and in my time here I’ve developed a deep appreciation for the building I work in—for its ubiquitous, interactive technology (hello, they’ve got a bookBot), the creative design and how a very important piece of the IEI puzzle, the Emerging Issues Commons, fits into the Hunt Library’s landscape. 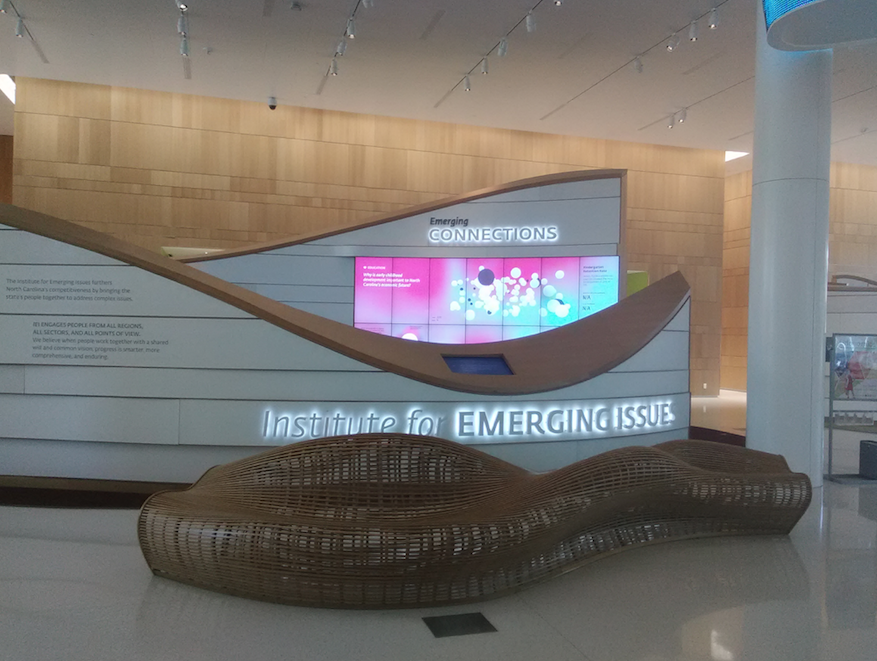 Haven’t heard of the Emerging Issues Commons? Well, we’re working to change that. You’ve probably seen it, even if you don’t know its name. Set off by the IEI Ribbon, which features changing colors and scrolling, IEI-specific messages, the Commons features interactive displays that visualize more than 100 county-level data points and allow users to input their own ideas for displays. There’s also a couple of nifty videos about North Carolinians who’ve faced challenges as well as one about the library’s namesake—Former N.C. Gov. Jim Hunt.

Connected to an online companion site, the Commons space is designed to facilitate discussion around some of North Carolina’s most pressing issues in the areas of education, health, economy, and environments. In other words: It’s suppose to get y’all talking.

And it does, but we think it can do even better. 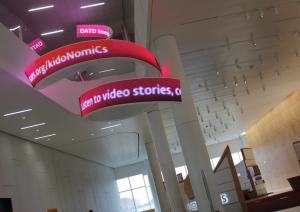 Since I’ve been at IEI, we’ve been talking about how to better utilize the space. This week, I sat in on an exciting meeting in which IEI staffers brainstormed about an update to the Commons.

As IEI IT Manager James Herrick puts it, the Commons (which was installed in 2012) needs to keep up with 2017 technology, which is an exciting challenge in a digital world booming with change. “Technology is even more interactive now. Social media has just exploded since the Commons was installed,” said Herrick, who envisions using social media-style platforms to make the Commons even more interactive in the future. Other potential Commons ideas explored at the meeting: A virtual “Free Expression” wall, social and news media feeds and even more data personalization, such as exhibits which allow users to bring up groups of stories related to a topic or place.

What would you like to see in the Emerging Issues Commons? We’re always looking for Emerging Voices  . . . and ideas.