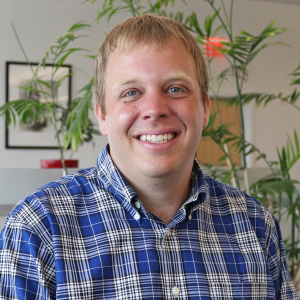 The Institute for Emerging Issues (IEI) is excited to announce that Pearce Godwin, founder and CEO of Listen First Project, will be leading IEI’s Civic Conversation Initiative this summer.

Since 2013, Godwin has been encouraging people all over the world to bridge divides through meaningful conversations. That’s why he’s a natural fit to join IEI’s Civic Conversations, an initiative that took shape as a result of our ReCONNECT to Community Forum held in Asheville, N.C. The goal of the initiative is to help people in North Carolina reconnect by listening to and learning from each other.

“I couldn’t be more honored to now have the opportunity to invest personally and professionally in doing the work that I’ve attempted to do across the country right here in North Carolina with the Institute for Emerging Issues,” said Godwin.

“My hope is that the Civic Conversations project…will be a real catalyst towards a reconnection of North Carolinians in a way that will spur all of us forward and will make all of us better and more prosperous and healthier as a state, as a society, as a culture, and as a people.”

A native North Carolinian, Godwin grew up near Blowing Rock and went to school at Duke University. In 2013, he was preparing to return to North Carolina after a relief mission trip to Uganda.

“As I was looking forward to coming back home to North Carolina, I had heard that my beloved home state was making national headlines in that summer of 2013 for folks being at each other’s throats across divides,” said Godwin.

Reflecting on the divided state he was about to return to, he published a blog post called “It’s Time to Listen.” The post was picked up by national news publications.

“And to my surprise and excitement, that simple message was resonating in all corners of the country,” he said. “And seeing that, I thought, well, why don’t we try to do something about it? Let’s try to translate these words into action and make a tangible impact.”

He began the Listen First Project, leading thousands of people across the nation to sign the Listen First Pledge. Godwin then launched National Conversation Project and gathered the #ListenFirst Coalition, which now includes more than 225 partners that promote and practice bridging divides through conversation.

Godwin says he wants to see North Carolina become a leader in the country in “mending the frayed fabric of society.”

“My hope is that the Civic Conversations project…will be a real catalyst towards a reconnection of North Carolinians in a way that will spur all of us forward and will make all of us better and more prosperous and healthier as a state, as a society, as a culture, and as a people.”