More than you might think, especially when it comes to linguistic diversity and the myriad ways we can judge others’ character based on their speech and regional dialects.

It’s a topic Caroline Myrick helped the Institute for Emerging Issues explore March 27 as part of IEI staff training. Myrick’s presentation, entitled “Language Variation: The Forgotten Dimension of Diversity,” explored questions like “What is language diversity?” “Are some dialects better than others?” and “How is language connected to identity?” 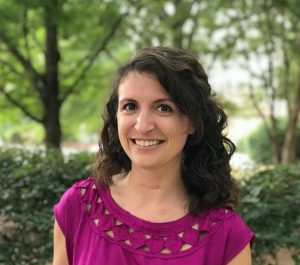 For Myrick, who grew up attuned to language accent thanks to a bidialectal family— Myrick has a Caribbean-born mother and Southern U.S.-bred father—understanding linguistic diversity provides the foundation for appreciating diversity in general, a crucial topic for any organization in the multicultural 21st century.

“We can’t celebrate diversity without celebrating language variation,” Myrick said. Myrick’s linguistic diversity presentation focuses not only on how regional and ethnic dialects are formed, but how we judge them and why. For example, people often perceive speakers of Southern U.S. dialects as less educated. Why?

“IEI has long valued diversity in our collaborative work on key emerging issues affecting the state’s future economic competitiveness-—sectoral, geographic, demographic, and differences of perspective, to name a few,” said IEI Senior Policy and Program Manager Sarah Langer Hall. “What people say and how they say it is another area of diversity that we need to be mindful of, especially as an organization that believes in the power of storytelling.”

Elizabeth Snively, a communications technologist with NC State’s Office for Institutional Equity and Diversity, remembers the negative stereotypes she held about Southern dialects when she first moved to North Carolina in 1997 from Silicon Valley. She’d watched many movies and TV shows where characters with Southern dialects were depicted as less educated. A bevy of intelligent North Carolina co-workers quickly put her negative assumptions to rest.

“It’s never about language per se, it’s always about language as a proxy for something else,” said Walt Wolfram, an NC State linguistics professor well-known for his work on sociolinguistics. Many times, like most things, it’s about power. Historically disadvantaged population groups and regions are perceived as speaking “incorrectly” when really, no dialect is “correct.”

But it’s OK to note speech differences—after all, regional dialects speak of our combined history and the wondrous flexibility of language—just not to disparage them.

So, it’s not bad to notice that your Brooklyn-bred co-worker says CAWfee instead of coffee or that the Midwestern guy the next cubicle over insists on calling the water fountain a “bubbler,” but not so good to make fun of them for it.

The better thing is to learn.