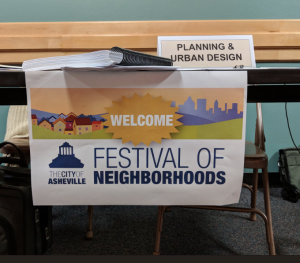 If you haven’t been to Asheville in a while, GO.

Besides its beautiful natural setting, the city has experienced a renaissance in the last several decades, as travelers, retirees and those looking for a more Appalachian pace of life trickle in from around the world.

Walk the streets of the city’s Art Deco downtown, and Asheville’s energy jumps at you. Everywhere, niche shops selling everything from artisan honey to tattoos fill with boisterous patrons.

But there’s another side to this growth, because population growth brings benefits but also challenges, such as infrastructure keeping up with development and a rising cost of living.

Then there’s the intangibles—as North Carolina cities like Asheville grow so quickly, how do they keep their community spirit?

Does it get harder to come together with your neighbors when you don’t know as many of them any more? 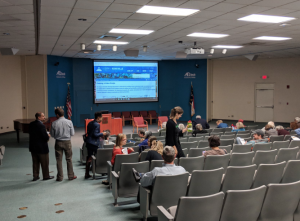 We’ll talk about questions like that at our upcoming civic engagement forum ReCONNECT to Community, being held in Asheville Nov. 27, the first of six forums in our ReCONNECT NC series, being held throughout the state over the next three years, each focusing on a different aspect of civic, social and economic “reconnection.”

Some of these same questions were also addressed at the Festival of Neighborhoods, an event held in Asheville Oct. 27 by the City of Asheville.

“It’s really good for people to be able to meet their representatives,” Asheville’s Neighborhood & Community Engagement Manager Brenda Mills said during the festival, where attendees could meet a number of community officials from the cities’ various departments, such as planning, public safety and police. From questions about in-fill development to roads to keeping up with development, the attendees’ event questions didn’t surprise Mills. She hears questions like that every day.

In fact, city officials across North Carolina hear questions like that every single day, as the Tar Heel state continues to boom with growth. Asheville is no exception. The Appalachian city’s population has grown from 54,022 in 1980 to 89,121 today.

What better place to hold our forum ReCONNECT to Community, in which we’ll hear speakers like New York Times columnist David Brooks, community leader Tru Pettigrew and UNC Asheville history professor Darin Waters talk not just about civic engagement as a whole, but the specific challenges of building community in a growing, fast-changing state.

We’ll also have five community initiatives (including Asheville City Schools Foundation!) telling their stories of how they’re increasing civic engagement in their neck of the woods.

REGISTER NOW for the forum at emergingissues.org!