“When I saw that my teacher was running for office, I knew immediately that I wanted to help.”

This quote from Tanner Glenn, a 22-year-old recent graduate of the University of North Carolina at Chapel Hill from Clayton, N.C., speaks volumes of his passion for politics and his willingness to get something started. 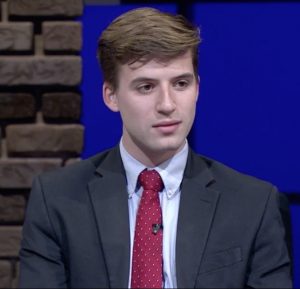 That passion led Glenn to not only run the campaign for that high school teacher, Rich Nixon’s run for the North Carolina legislature, but also to establish the Institute of Politics (IOP) at UNC-Chapel Hill, a nonpartisan, student-driven organization that aims to engage and inspire undergraduate students from across the political spectrum to pursue careers in politics and public service.

The first of its kind at a public university, Glenn hopes the IOP will make a positive impact in North Carolina and beyond by plugging students into nonpartisan civic programming. Recently celebrating its first anniversary, the Institute of Politics has already served more than 1,500 students, from fourth graders to doctoral students, and has welcomed nearly 100 guest speakers through its many initiatives.

The IOP has created and now supports a number of nonpartisan student organizations. Its Civics in the Triangle program places undergraduate students in classrooms across the Triangle teaching U.S. History and civics to elementary and high school students. Its Tech Team program partners undergrads with government offices across North Carolina to tackle important digital projects on a pro-bono basis. The Carolina Political Review, another program of the IOP, provides a dynamic outlet for students of all ideological stripes to write about a wide range of political issues. Additionally, students have the opportunity to hear from today’s top political minds through large events and intimate dinners as part of the IOP’s speaker series.

Through its Fellows Program, the IOP welcomes a cohort of prominent political practitioners to campus each semester to lead weekly seminars and offer office hours for students. The IOP also runs an internship program, which arranges and funds and internship opportunities for UNC students in communities across North Carolina and in the nation’s capital.

Prior to founding the IOP and running his former teacher’s campaign for the state legislature, Glenn helped organize national summits to engage young people in politics and founded Splash UNC, an organization that brings thousands of high school students from every corner of North Carolina to UNC to take classes created and taught by undergraduate students.

Glenn says managing his former teacher’s campaign was a profound experience. By knocking on thousands of doors and having countless conversations with voters across his district, Glenn had the opportunity to hear stories from all kinds of people in his hometown about “ . . . the challenges they were facing and what issues mattered to them.” The experience only gave him a deeper commitment to politics and reinforced his belief that the hopes and challenges of everyday people could be addressed through the democratic process.

Glenn grew up in a Republican household that was not heavily engaged in politics. However, he says his “politically consciousness” was sparked by all of the conversation surrounding the historic 2008 presidential election. Glenn pursued this spark by working for both the North Carolina Republican Party and the North Carolina Democratic Party during high school. Glenn says working for both parties provided him with a unique perspective on the state’s most pressing issues. While this experience certainly exposed the divisions that exist between the parties, Glenn says the experience also “highlighted potential areas of common ground.”

In his spare time, Glenn likes to spend time with friends and is an avid reader. In particular, Glenn enjoys reading about history, foreign policy and economics. He has a keen interest in both clean energy and space exploration, saying he is inspired by “the rise of the commercial space industry and the prospect of interplanetary travel.”

Although his schedule is busy with a variety of projects, Glenn takes time to travel and see the world around him. He talked about a road trip he took across the country last summer where he visited a number of national parks at places like Grand Canyon and Yosemite. Glenn, who has always loved the outdoors, said visiting these national parks only gave him a deeper appreciation for our national heritage and renewed his commitment to building a country that lasts through the ages.

Glenn’s ‘always-seeking-to-learn’ attitude and habit for asking for advice has opened doors for him he never could have anticipated. However, he has taken it all in stride, and continues to push forward to achieve his vision of a more connected and civically-engaged North Carolina. Glenn’s love for public service is rooted in the idea that politics can make a difference and that if we have meaningful dialogue across ideological lines, we ultimately realize there is more that unites us than divides us.

Now that he’s graduated, Glenn will still work with IOP.  Glenn has taken on a full-time job as IOP’s first executive director. He has high hopes for the coming year and looks forward to working with students and University leaders.  Recently, President Margaret Spellings of the UNC System singled out Chancellor Folt and UNC-Chapel Hill for lending institutional support to the IOP. Spellings said she looked forward to working with the IOP to host conversations in the coming year that advance “strong and diverse debate on our campuses.”